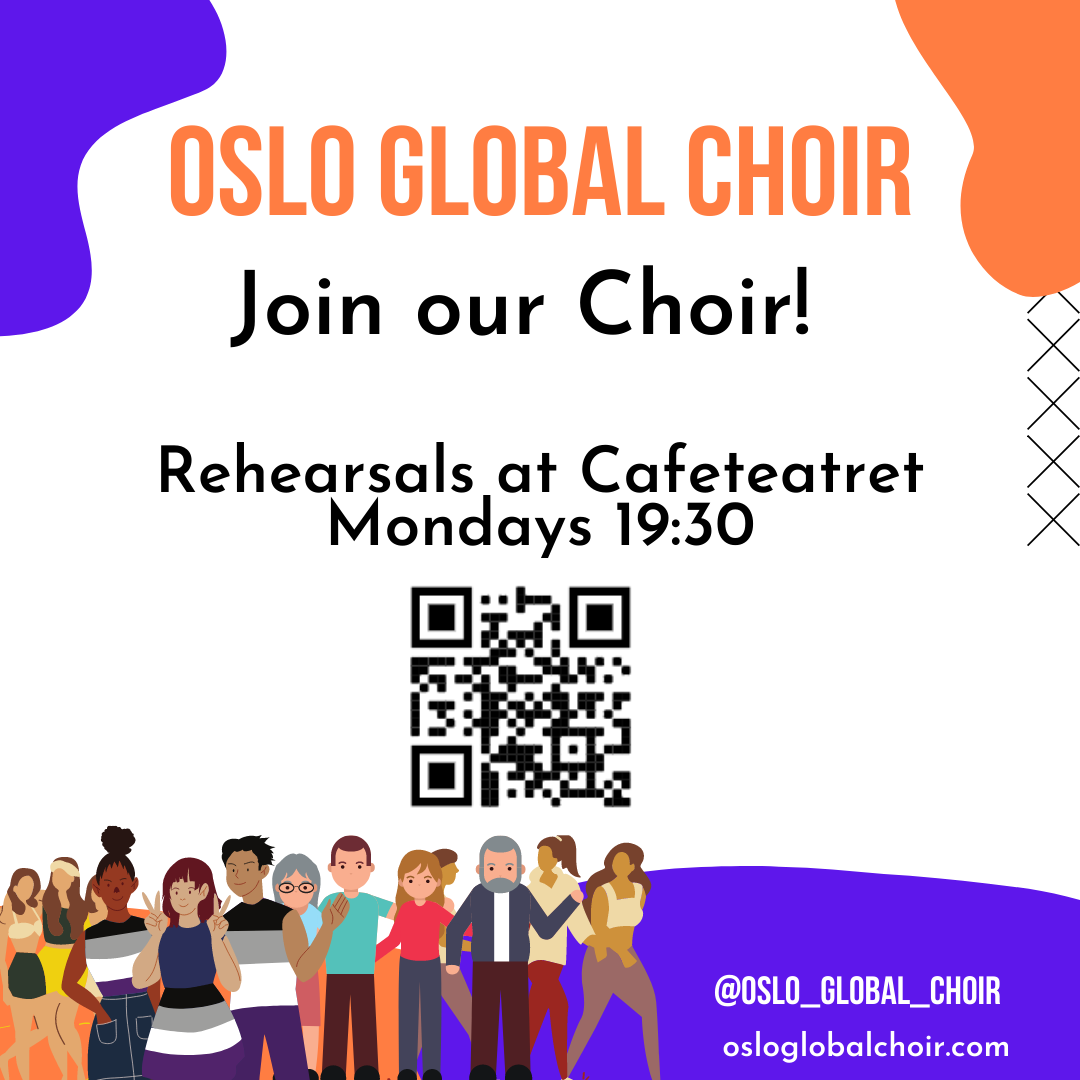 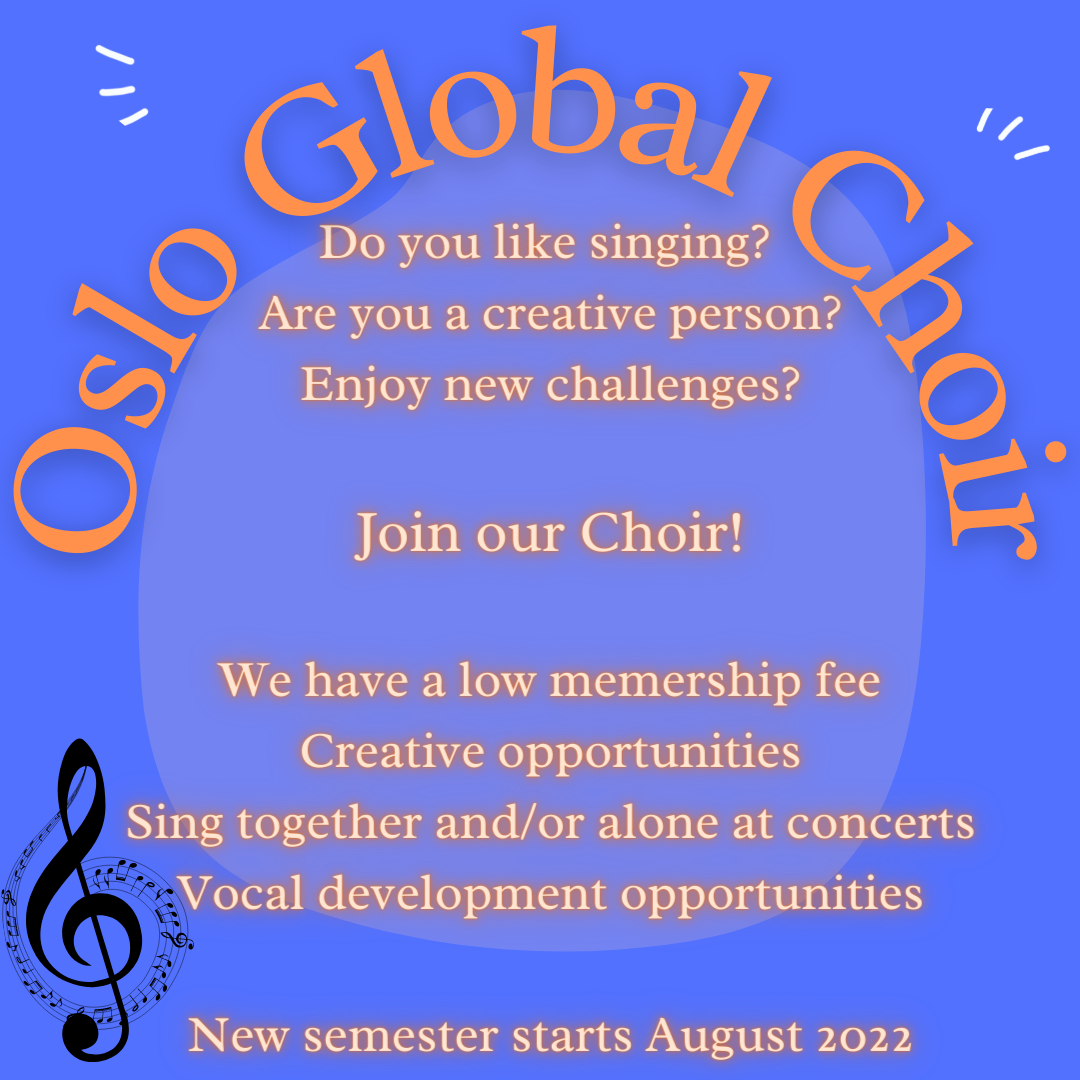 Oslo Global Choir (OGC) reflects the spirit of the city of Oslo - the capital of Norway, which is vibrant; diverse; dynamic and, today, a truly global city with just no looking back. Founded in 2013  and originally known as Cafeteatret World Choir by artistic directors Nina Vestby and Ombeline Chardes; today OGC has become a choir committed to creating good music and a lasting impression with our audiences. OGC presents an eclectic repertoire at lively concerts with musical genres including pop, rock, chanson française, Norsk, Samisk, and world music.

OGC is an established amateur choir providing opportunities ranging from personal vocal training (open-to-all to artistic growth) to forming spin-off musical groups for talented musicians. OGC also collaborates with talented and accomplished musicians from Norway and around the world to create musical; educational and adventurous experiences for our members and audiences. Membership of the choir is open to those who are committed to learning how to sing; regardless of experience (beginners, amateurs and (semi-)professional musicians are welcome), and is based on an initiation and joining process.

We consider ourselves lucky to be a the house choir at Cafeteatret - a small, cozy and amazing location with great accoustics, and recommend you check out the wonderful Nordic Black Theater located at Cafeteatret for their events.
View Repertoire

The songs in our repertoire are chosen by our members and curated by an artistic committee. Embracing diversity in our membership and in our music; we seek to “Bring the world to Oslo one song at a time”.

Rehearsals are 19:30 - 21:30 Mondays at Cafeteatret or accross the road. Contact us at info@osloglobalchoir.com for more information.

She graduated in the class of Arielle Gill and had her DEM of violin. At 19; Ombeline decided to expand her musical horizons. While studying Musicology mention Didactic at La Sorbonne, she joined the Jazz orchestra of Laurent Cugny and the Jazz department of the Ecole Nationale de Musique de Cachan in violin and writing / orchestration / arrangement. For the purposes of the bachelor degree in Musicology, she started to learn the piano and sing at the conservatory. A year later, Ombeline joined a writing class and studied composition, orchestration / arrangement and the Renaissance counterpoint. She also began studying the viola and electric bass at the Conservatory in a desire to play lower frequencies and occupy another function in groups and ensembles.

Her course / school curriculum concludes with a Diploma of Musical Studies in Violin as well as Music theory and a Bachelor of Musicology mention Teaching. In addition to conducting Oslo Global Choir, Ombeline performs in a duo called, ‘The French Connection’.
‍
Ombeline ChardesThe French Connection

Do you want to become a part of our choir?

Oslo Global Choir - is an amateur choir where everyone interested in music and community is welcome to join. We are grouped into Sopranos, Altos, Tenors, and Basses.

Make sure you are mostly able to attend rehearsals on Mondays from 19:30 to 21:30. Send an e-mail to info@osloglobalchoir.com and we will give you information and invite you to join our rehearsals. Please also feel free to invite friends to join!
‍
The two first rehearsals are completely free and then you need to decide if you want to join and commit for the rest of the semester. It is possible to join during a semester.

We have two locations we usually rehearse at. Our favorite is Cafeteatret.

If you decide to join; we believe we have a low membership fee compared to many other choirs and we have a 50% discount for students and people who are unemployed. All income is used by the choir to pay our wonderful conductor as well as other expenses.
‍
Click the button below if you would like more information. It is also possible to just show up to our two first rehearsals. Hope to see you there!

We are a social group and some of us enjoy meeting up and singing Karaoke after Choir Rehearsals on Eagle pub and you are welcome to join us! We also encourage you to support Karaoke places in Oslo and also support Karaoke NM

There are several ways to support us. It would be great to see you at our concerts - you can be notified about concerts and events by signing up to our mailing list or Facebook. And if you wish, you can support us economically by becoming a support member. It is also possible to directly Vipps us a one off donation by either searching for Oslo Global Choir in Vipps or using Vipps number 753430. You can also support us through Grasrotandelen from Norsk Tipping. Another great way to support us is by sharing the choir with others - we have a flyer which you can print and give to other people who might want to join - We have previously used VistaPrint to successfully make flyers. Please feel free to share this website on social media as well
‍
Concerts & Mailing listGrasrotandelenFlyerMonthly VippsSingle VippsFacebook

Support us with monthly Vipps 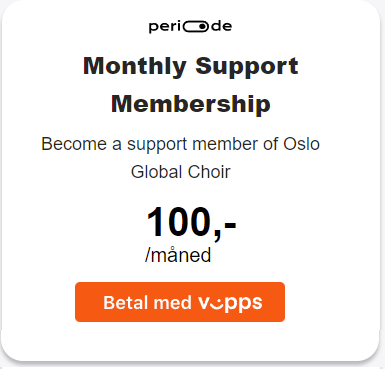 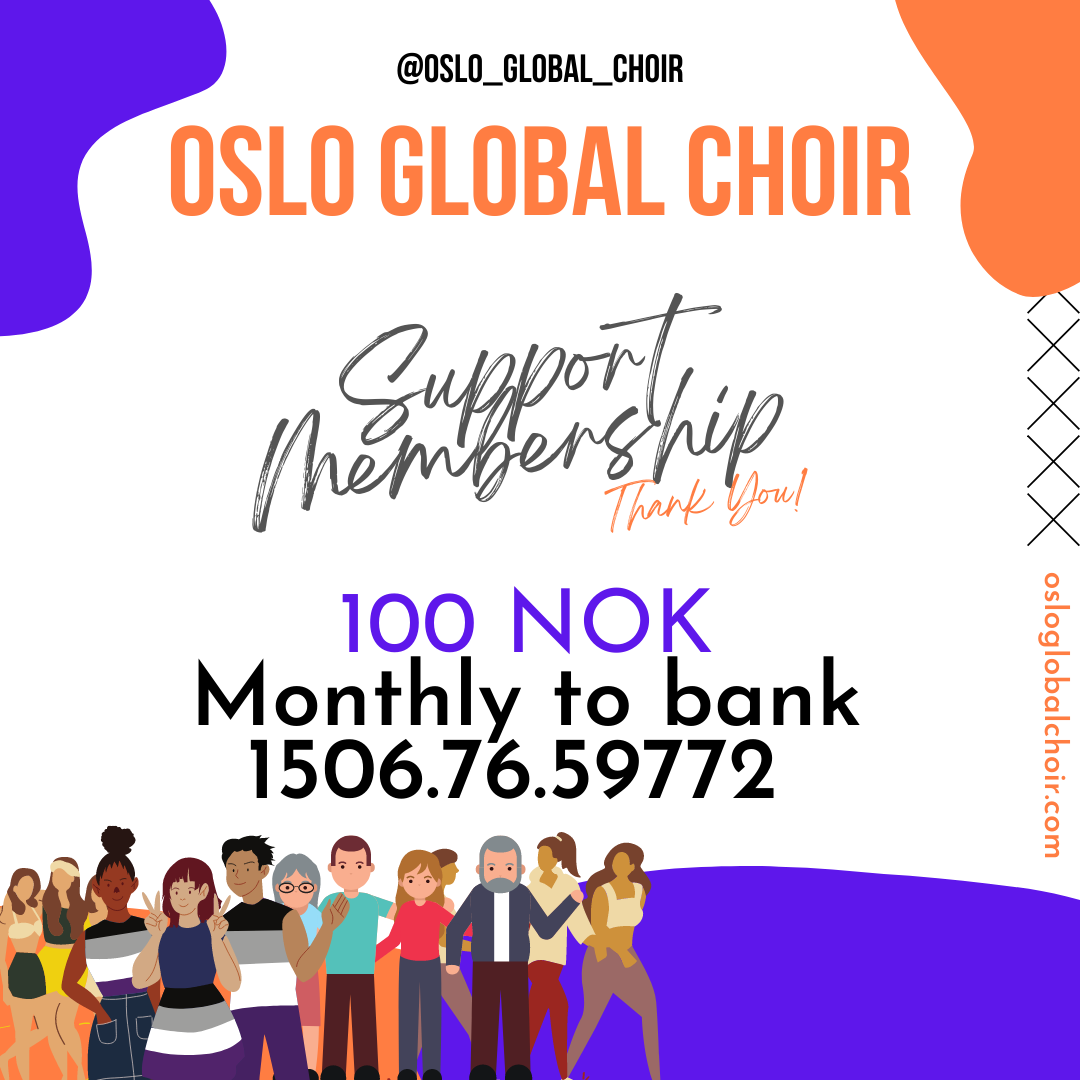 Please take a look at Payment Terms and Conditions 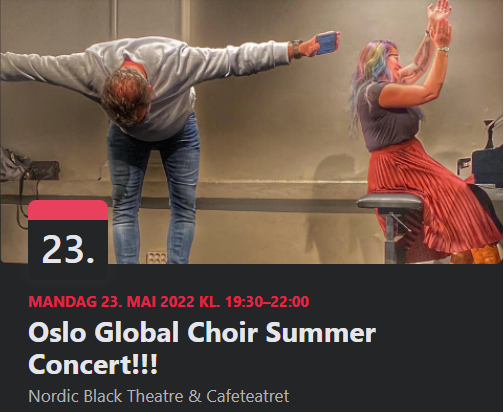 May 23rd 2022 at Cafeteatret - Oslo Global Choir performed in front of a fantastic audience and we really had a great time. Take a look at images and videos below :)

Thank you! You have been added to our mailing list and will receive events from Oslo Global Choir!
Oops! Something went wrong while submitting the form. 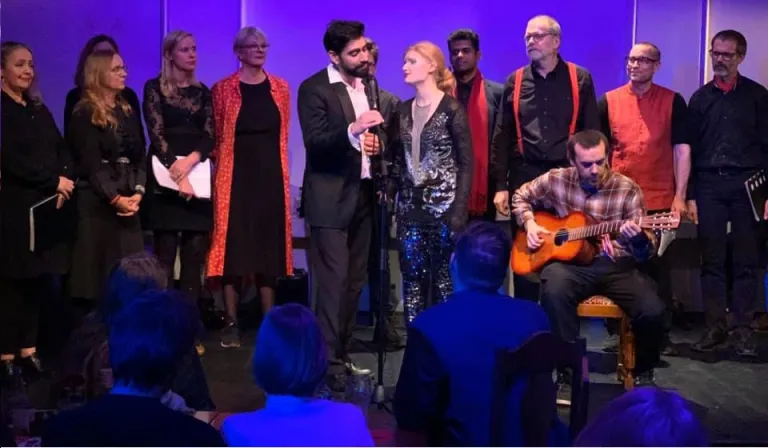 We have been contacted by some artists and choirs and some of the interactions are featured here. 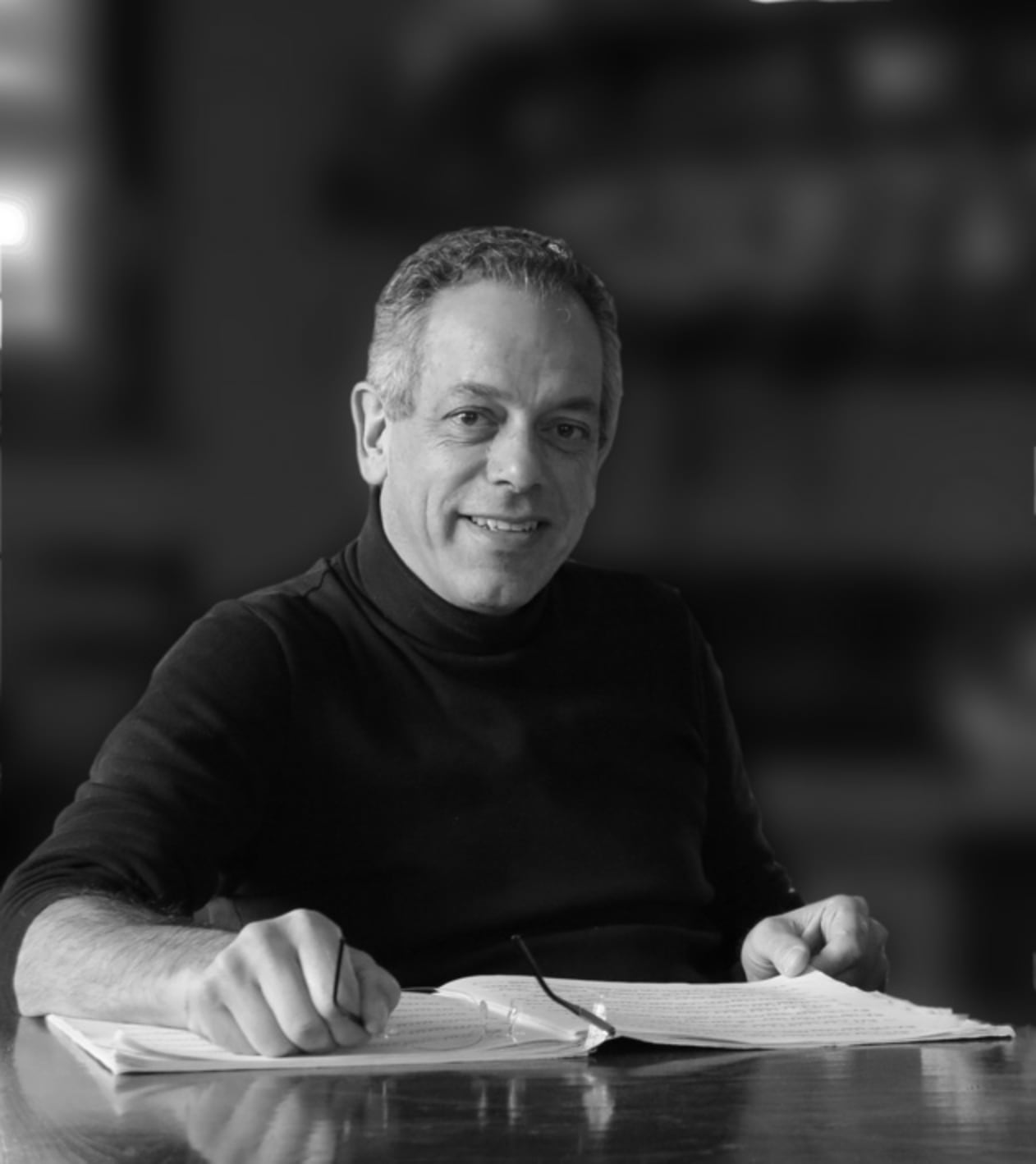 Scores of an Italian composer

“Vos de Mont” is a Friulian men’s choir that interprets the compositions of its conductor Marco Màiero: his songs are in Friulian, in Italian and some are translated into French: they are all written for female voices, male voices and mixed voices. You can go to the author’s site to download the scores (all free) and listen to “Vos de Mont” on YouTube.